I keep bumping up against the idea of community. I can’t avoid it. What also keeps cropping up in these reminders; in emails from friends, in conversations about “Church”, in stories I’m experiencing, in letters and plans and tweets and experiences is simply that you can’t build community without food or stories. I’ve said it myself here. The key to building community is sharing food and sharing stories. And when I meet someone, or read something or watch something that echoes this sentiment back to me, it resonates and attracts me. 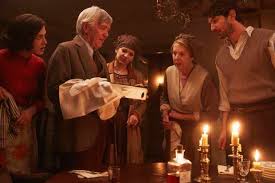 So when I experienced a gentle, whimsical story about how stories (via books) were the glue and refuge of a group of people in a dark time, of course it was one that really connected with me. And The Guernsey Literary and Potato Peel Pie Society is a gentle story. One might feel that not a lot happens in it – but then as you know, I’m a big fan of “doing nothing“, even if it were true (and I’m not convinced it is). There’s a dual narrative, both of “current events” – though those events are 1946 London and Guernsey – and of the founding and development of the society throughout the German occupation of the island. Not everyone is a fan of flashbacks, but it’s a reflection that the group’s internal dialect is stories – ranging through stories they’re happy to tell, stories that are painful to tell and stories that must be coaxed.

The unpeeling of how the society formed (a small act of resistance in gathering together for food), then unfolding into how it kept going, (also an act of resistance, a sharing of the stories and wisdom of former days and people the type of which the Reich would hate) and how the pivotal member fell in love, opposed the occupation and was eventually sent away is set against the”current day” story of how the society still holds together after the war and still uses stories as the fuel to do so. And it’s only the full embracing of their own stories, of stopping hiding behind half truths and embellishments that brings healing (after a deep sorrow) and the real end of the war.

There’s also a lovely romance for the outside writer who finds herself drawn to the society and the man who lives close to the land but inhabits all times and worlds through his embrace of story – and who wouldn’t fall in love with someone like that. (But of course you already know I’m a romantic sap.) And the culmination (for me) being that when a story burns inside you, to tell it is to truly be yourself, to truly heal yourself and to truly reveal yourself – and in thus revealing you become the part of a community that the other members need and want to know and love. 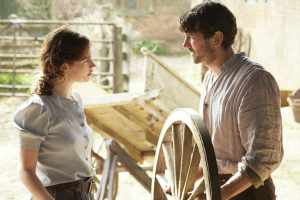 The film’s very gentleness and whimsical nostalgia seem to be what some critics sniff down their nose at and the source of some of the negative reviews. For me it was in fact this story’s strength. I don’t need every story to have a dark side or conflict or giant snakes jumping out of closets. We all sometimes just need to walk along beaches with characters or have flowers picked or recipes swapped and have religious fundamentalists put in their place and just stare at beauty for a while. Resting in beauty and wonder is, I think, a balm for many ills.

And in case you missed it, there is a dark side in this in the faces and boots of the German occupiers who work men to death, restrict community and send their own men away for falling in love with a local girl. Maintaining community and “normality” and a sense of themselves in the midst of that… That to me is one of the greatest acts of heroism.  It’s an example I would follow come any possible day that the dark hand of authoritarianism tightens its grip (and looking at the moment, that’s not all too fanciful an idea). I’ll be there, with a book and film in hand, telling stories and keeping community with the ones I love. It’s what we’re made for.