Here’s a ‘story’ in words and pictures: a story about Fairness, Justice & Authority.

I’ve been chewing over an idea for a few months now, an idea that is presenting itself in pictures in my head, an idea of how to show people what it really means to bring fairness to others, to excercise Justice and the responsibility of those already blessed to potentially be treated ‘unfairly’. (There will now follow some badly drawn pictures – I’m not an artist or actually talented in any way in the drawing sphere – feel free to laugh ^_^ )

What folks want to happen – 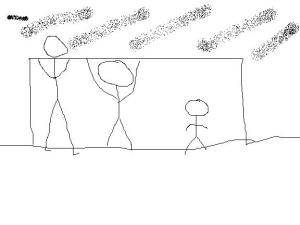 Here we have three little men – stick men of course. All they want is to be able to see over the fence – I’m guessing some kind of sporting event 😉 . One is already tall enough to see over, but his compatriots aren’t. In workplaces, schools, families and communities all over our country and our world folk have the same basic needs – food, water, dignity, shelter, love, sanity – but can’t get them because people are different and their situations are different. 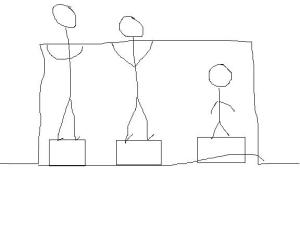 There are folk out there who want us all to be treated the same – to ensure fairness and equal treatment. So here we have our three men (actually I think they’re boys) who have all been given a equal piece of help in order to see over the fence – One Box each. But hey, the little guy still can’t see over! Is this right? Of course not! But so many times in our schools and workplaces and in our welfare systems this is the model of ‘fairness’ that is presented to us. Managers in organisations go overboard to ensure everyone is being given the same terms and conditions – pushing their behaviour as far as “jobsworth”. (Ah remember the Jobsworth award on ‘That’s Life’? That was a cool segment on a great show). This model of ‘Fairness’ is often used as a weapon against those who are different (in both the top and bottom ends) as an excuse and defence of clear unfair treatment. Presenting this as fairness is a lie, it’s cruel and it’s simply wrong. 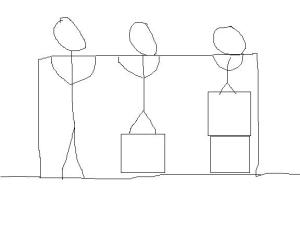 So, how to address the ‘fair/unfair’ problem? Essentially, the little guy gets 2 boxes and the tall guy gets no box. How is this fair? Aren’t we treating folks differently? Yes, we are treating folks differently, because people ARE different – they have different needs, different wants, have differing views and are going in different directions. Treating folk differently is NOT the same as treating them unfairly. Fairness is about achieving the same outcome for everyone – in this example, being able to see the ball game – irrespective of how that outcome is achieved. It’s not that the tall guy is being disadvantaged – He already has the advantage. What we’re doing is ensuring the little guy is given what he needs, without wasting any resource – because yes it could be argued that if the small guy needs 2 boxes to see over the fence, then the other 2 boys should also be given 2 boxes so that we can be seen as being fair – but this would be wasteful, the tall boy doesn’t need any boxes. And there are a finite number of boxes, if we give to those who don’t need it, at some point those who DO need will end up without. One of the First things God asked us to do in this world – after going forth and multiplying – was to look after it and be good stewards of the resources he’s given us. That means not wasting stuff on people who don’t need it. This model is what some people refer to as Positive Discrimination or Affirmative Action if you’re from the States.

There can be a down side to this approach of course, if it is taken to the extreme or not handled in the spirit it is intended. You need to be careful how you are discriminating positively not to demean or belittle the “tall” ones, and the care with wich you do this could reduce resentment between groups and the hostility that can easily build up. It’s not right to just arbitrarily apply Positive Discrimination without a gentle and gracious view of why certain discriminatory steps are being taken – that’s where we store up trouble for ourselves. ( A really good example comes once again from The West Wing – where CJ and Toby are discussing Affirmative Action. CJ’s fatehr was an accomplished Maths Teacher – but “everytime there was a promotion He saw it going to a less qualified Black Woman”. Finding a way forward towards Justice whilst avoiding this kind of story is the minefield we are currently picking our way through)

The Unfortunate reality of our Current society. 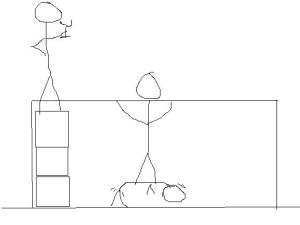 This is Capitalism. This is the picture that’s been making me feel angry the last few months. There are variations of the picture of course, where the 2 boys without boxes are both crushed under the boxes on which the tall boy is standing; The Tall boy periodically pushes the medium boy’s head down; The Tall boy takes steps to make the fence higher so the medium boy can’t see even if he stood on small boy’s head. At the worst extreme, all three boys are back in the same boat as the owners of the ball park raise the fence three times as high.

The problem with where the taller boy is standing is that his motivation ceases to be to see the game, but instead his aim is to ensure he remains in his superior position and to take every step to ensure the other two boys don’t topple him. For Him, the game on the other side of the fence has become secondary. Perhaps it now actually bores him – He got what he wanted, but he’ll be damned if he’s giving up his spot to anyone else. For the small boy too the game is secondary. His immediate need now becomes “Oh my God I hope my back doesn’t break!”. And tall boy uses every tool in the box to ensure Medium and small boy are opposed to each other, because the minute they realise that working together they can push him off the boxes, he’s finished.

The sad reality we all face every day is that not only are all men not equal, they’re not treated equally, and those at the “top” don’t want all men to be treated equally. I think sometimes it’s not that those at the top hate the “scum” at the bottom (although invariably scum rises to the top if liquid 😉 ) because that would imply they actually care in some way. They are simply indifferent to what others are experiencing – in this as in every sphere, the opposite of Love is not Hate but Indifference.

The so called revolutionary answers of the past have involved combinations of the two smaller boys joining together and pushing the taller boy off his pedestal – but wending up simply replacing him and leaving him as the cripple at the bottom of the pile. Or all three boys jumping over the fence and taking over the ball park – again , only to replace the former owners and to ensure no-one can ever do the same to them – build a stronger, higher fence. (Think of The Pigs becoming Humans at the end of Animal Farm) 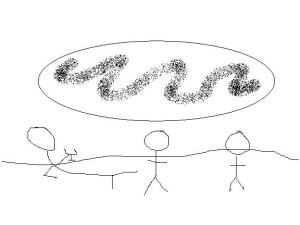 The Answer? It’s simple. Take. Away. The Fence.

Make the game free and available for eveyone to watch. Don’t exclude, include. It’s not about giving folk the help so they can help themselves, or enabling people to lift themselves up by their bootsraps. It’s removing the need to be lifted up in the first place. It’s bending down, lowering our heads, embracing humility so that No-one gets left out.

It’s turning our backs on the “heads on Pitchforks” mentality of revolution and turning our minds to actual revolution – the revolution of Love that puts the needs of others before ours, that can potentially mean exhaustion for me, that can mean loss for me, that could mean stress for me. The revolution of others-centredness that means I don’t need to fight for my rights, because we all uphold each others’ rights and needs, I don’t have time to fight for my rights, because I’m meeting my responsibilities to parents, friends, my community – and even to those who might be considered my enemies.

Oh and let Tall boy have his cocktail, we wouldn’t deprive him of that. 😉

Join me in looking for ways to remove the fences from our communities, our neighbourhoods, our workplaces, our budgets, our welfare plans, our businesses, our sports arenas – our minds. Thanks for reading….

1 thought on “Fairness, Justice and all that Jazz (or what’s wrong with us)”