This isn’t the exact image that was brought to mind when I stood up to read about the narrow way that Sunday in church, but it’s pretty and it’s of the mountain I want to talk about. That’s mainly because it’s one of the mountains I’m most familiar with – Snowdon, called Yr Wyddfa by those whose land it is. (Pronounced “Ear Withva”)

Legend has it that Yr Wyddfa is the gravesite of an oppressive giant king who made his cloak from the beards of all the kings and heroes who attempted to slay him. When a young King Arthur, new to his throne and relatively unblooded, heard of this bully he set out to face him. Being still a “beardless boy” the giant king saw him as no threat. He was not the last to underestimate the Bear of Britain – Arthur defeated and killed him and so the mountain is in a way the sign of Arthur’s first great act.

Yr Wyddfa is in the middle of the UK’s national three highest peaks (Ben Nevis in Scotland being the highest and Scafell Pike being the lowest) but for me it’s the one I like best of the three, perhaps because of the Arthur story and also because it’s the one I’ve explored the most because of my time living in North Wales. There are other Welsh mountains I do prefer more, such as Moel Hebog and Cadair Idris, but Yr Wyddfa is undoubtedly king.

There are 6 official named paths up to the summit of the mountain. Some short, some long; some scaling the south face, others the east. My personal favourite is the Watkin Path which passes Gladstone Rock (yes, named after THAT Gladstone who opened the path) and where I more often than not reach about three quarters of the way up, swing roung the head of the valley (we call it the Cwm in Welsh) and come home. I’m not particularly bothered about “bagging the peak”, the walk with the right company is more what I’m interested in – analyse that element of my personality if you want! 🙂

But the most dangerous route – and make no mistake, Yr Wyddfa does claim lives -is the ascent that separates off from the Pyg Track and then takes in Crib Goch. A sharp, knife-like arête with perilous drops either side, the Red-Ridge is not one for the faint of heart. It is not possible to go along it more than one at a time; it is the very definition of a narrow road. And yet I’ve seen folk queuing on it like it’s the M6. On a bank holiday with good weather there are hordes of people who take the “narrow road”. Not everyone does, I almost didn’t. it’s tricky and difficult and pretty darn scary at points – but the views are stunning and the sense of achievement is a pretty darn good drug.

But here’s the thing. More people than you think use this narrow road. And those who use the other paths still get to the top of the mountain. And you don’t even need to walk up it at all – there’s a train to the summit!

Now, those who’ve used the train haven’t exercised as much as the Crib Goch Mountaineers have; they haven’t bonded through adversity, they missed the hawk and swallow sharing their journey, they possibly missed the Purple Man joke and definitely missed pausing for lunch at the very precipice of danger with an fantastic view. But hey, they still got to the top.

The measure of whether a person makes it to the top of Yr Wyddfa is not which path or route they have taken. The measure is a combination of the physical condition of the walker/mountaineer, the appropriateness of their clothing & gear and the conditions of weather and mood of the mountain itself. (Yes Mountains have moods, trust me.) Even by those measures, even the healthiest, most prepared climber cannot overcome the most challenging environmental conditions.

So, when I hear Jesus say “I am the way, the Truth and the life, No-one comes to the Father but by me”, I hear this:

That none of us could reach that peak. That there was a snowstorm so fierce that even the best of us could not conquer the mountain. That for some of us, even setting off was a none starter. We could never, not a single one come close to that cafe on the summit.

But that by what He was about to do (on Good Friday) He was ensuring that the environmental conditions became as such that everyone of us could make our appointment with the Divine waiting for us with a cup of tea.

He was lifting the Cloud, stilling the wind, raising the temperature and melting the ice. If He didn’t do it, all those obstacles would remain and no-one would make it. “No one comes to the father except for what I’m about to do!” But once the snow, wind and clouds are gone? Everyone can get there!

Is the narrow route on Crib Goch more rewarding and challenging? Yes!Is it the best route up the mountain? Some might say yes, some no. Is going up on the train kind of boring? For me, yes! for others, not at all. Is the Watkin Path much much too long? Oh yes! But I get to spend time with my friends and can actually chat because I don’t have to concentrate to look that my feet aren’t about to slip down a precipice! But each method can reach the top in the right conditions.

Why talk about inclusion? Because the way was closed to all (by the conditions). Now the way is clear for anyone who wishes to travel (by His actions). 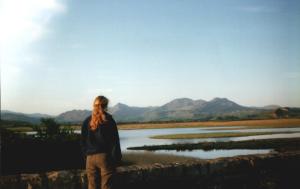