Far to the North is an island where the Gods dwell.

The island is shared by a chosen tribe of people; they work and live and hunt and cook and tell stories and make love. And they listen to the Gods and write their words.

For the Gods speak.

On the island is a cave, a cave full of glittering jewels, a pool and glowing mosses. The people may enter the cave only one way for the other end is but a small opening that only a beetle may pass through. It is on the other side of this opening that the Gods dwell, inaccessible to the blessed tribe. But they speak through the small opening.

And here are words of life and wisdom, of direction and comfort, sometimes of discipline, sometimes of correction. For they are from the Gods. This is undoubted. It is an honour to be the one chosen to sit at the mouth of the cave when the Gods speak and record the words to be taken back to the tribe.

But there have been times when storms rise and the Gods do not prevent the storm and the person chosen becomes swept away in the sea. And the Gods take them to live on their side of the island.

And what they have written becomes lost and so some of the words of the Gods are lost to the tribe.

And there are times when the voices of the Gods echo around the cave, bouncing off the walls and the one chosen to record the words writes what they think they have heard.

And what they have written becomes a distorted version of the Gods’ words.

And there are times when the Gods speak and the wind comes and whips the words away and so it is only a noise the the chosen recorder. And they write what they think the Gods’ could or should have said.

And what they have written becomes their own voice and thoughts presented as the words of the Gods.

Over time much was written by those sitting at the mouth of the cave. The words breathed by the Gods echoing and trembling and whistling through the cave and each recorder faithfully wrote what they thought they heard. But through the generations a strange thing happened. Although the people knew the words whispered or shouted in the cave were words of wisdom and blessing and comfort and discipline and these words were shared across the tribe and read and discussed, it came to pass that they forgot that there were Gods and instead became to venerate the cave itself, calling the Cave their God. And there were days the Gods did not speak, yet there were still words written down. And there were days the Gods screamed NO! yet the word written down was yes. And because it was written, it became the Words of The Cave. And because the Cave was their God, the words could not be questioned.

And there came a day when the Good God, the Dagda, left behind his sisters and brothers. He left the Thunderer and the Horse Lord. He left the Cow-Eyed Beauty and the Musician. He left the Blinded-One and the Maimed God. They smiled and blessed Him as He left and Hoped that He could restore the Tribe to Their Worship instead of the Idolatry of the Cave.

He crossed the island and dimmed His light for a time to walk with the tribe. And he showed them in the flesh how they should treat each other. He challenged some of the ways they treated each other. He threw a feast and welcomed all to His table. He dressed the wounds of those who were hurt and embraced the people on the edges. He spoke against those who would use power to crush and exploit and He spoke up for those excluded and exploited and on the edges.

Those in the Tribe who truly loved the Gods recognised the Dagda’s actions as Holy and True and venerated Him as their True God. But those who worshiped the Cave pointed to the recorded words and said the actions of this stranger were not Cavical. The Dagda was much grieved and wept for the Tribe for He loved them dearly. And His love extended even though they hated him for wanting to include everyone. (They hated this because then it didn’t make them special and oh they loved being special.)

And they took the Dagda, who was to them a Stranger, and threw him into the wildest part of the sea, a part so wild they called it the Cauldron. And they rejoiced to see his head dashed against the rocks and his blood mingle with the turbulent foam stirred up by the angry sea. And they danced with glee when they saw the deep sea predators and scavengers come for the His body. They turned to the Dagda’s followers and said, “So you see, that is that. We can dispense with this nonsense now and go back to having folk who are in and folk who are out. And YOU are most definitely out.”

As for what became of the Dagda Himself? The Thunderer, The Horse Lord, The Cow-eyed Beauty, The Musician, The Blinded-One and the Maimed God all came to The Cauldron and gently gathered the parts of His body and breathed new life into Him. And for a time He became the Maimed God. And where His blood had mixed with the dark and terrible sea there came calm and respite and where it lapped up onto the island grew new life. And those who followed His example saw Him in this new life and were encouraged.

The Gods still speak at the mouth of the Cave. But they venture beyond their side of the island more regularly now and share themselves with the Tribe. With all of the Tribe, for their Love for the people does not come with conditions (how can it be love otherwise?) They share feasts with those who follow the Dagda and bear witness to those who follow the Cave.

And one day they will blast that Cave apart and reunite the tribe as one. Until then, The Tribe must go on. And follow their God as they see fit, whether it be Cave or the Good Gifting Welcoming God. 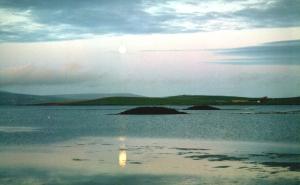