I’ve written, deleted and re-written this post so many times over the past few months. Because this is something that’s been burning in me for a very long time. And it’s one of the reasons I love and champion story. And it’s something that lies at the heart of Story; why it’s important and why its importance and power matters.

And events over the last months seem to have overtaken my thoughts. They are events that haven’t been isolated, but have grown from the dark recesses of our souls. And we have seen in ourselves, in humanity some terrible things. Things born of the terrible ideas and beliefs that have crept into our souls like an insidious virus; unknown, deadly, permeating every sphere.

Representation. The word feels ‘trendy’ and perhaps a bit ‘too liberal’. But in reality it’s about the kind of people who populate our stories. It’s a key element of our stories and is important to us as readers, watchers and listeners for these two complimentary and contrasting reasons: the representation of self and empathy with others.

This urge to copy, this instinct to learn by imitation, can be utilised through story to enslave and oppress or to inspire and empower. We can essentially only become what we behold. This is true not only in the realms of story, but in life. And is why feminists, race activists, LGBT seekers of justice all advocate for inclusion and equal representation across society. For thoughts on inclusion in church for example, go visit this post on Faith, Hope & Plenty of biscuits.

Bring to mind for example Lieutenant Uhura of the Star Trek TV series and you really understand the power of story. Nichelle Nichols was at first reticent to take the part of the Starfleet communications officer. However, after a conversation with Martin Luther King (no less!) she took on the iconic role. What was it he said to her? He knew then it was a role that wasn’t a maid or a girlfriend or a whore. He knew then that here was a character who was going to be a role model and inspiration for women and especially black women for decades. He said to her “You have the first important non-traditional role, non-stereotypical role… you are changing the minds of people across the world….Don’t you understand? For the first time we are seen as we should be seen. You don’t have a ‘black’ role, you have an equal role.” Nichols took the role and was indeed an inspiration. Mae Jemison who was the first black woman to be an astronaut said she was inspired by Uhura. She wasn’t the only one who was. 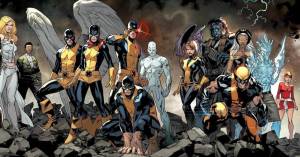 And now we have storytellers who are taking this challenge on. In the 60s Marvel and Stan Lee were using the X-Men and mutants as metaphors for the struggle of the civil rights movement. They used this ragtag collection of mutated humans to portray stories of a group of people who were marginalised and excluded, who were hated because they were different. And now they’re taking it beyond the metaphor and are showing that inclusion of under-represented groups is not something unthinkable and that not only does it not turn audiences away, but it draws them in. We’re seeing characters like Miles Morales, a black Hispanic youth and Kamala Khan, a Muslim girl who are both taking on major roles as a “new” Spiderman and a young Ms Marvel. And the seemingly most masculine role in the Marvel universe, Thor God of Thunder, is now filled by a woman. Recent news has also revealed that a young black woman will soon replace Tony Stark in the metal suit of Iron Man. Moving away from Marvel I see shows like Orange is the New Black which is one of the most diverse casts I’ve encountered; Star Wars giving us a duo of protagonists, one female, one black (though Princess Leia was always a pretty strong representation of her gender); and of course on everyone’s lips at the moment is the new Ghostbusters film. For me, the great thing about this move to inclusion is summed up in this set of pictures tweeted by @roonaymara

See these pictures and you see how being included in stories really matters. Just look at that girl’s face in the Ghostbuster’s picture. This is what it means to be told that you are valid, that you are worth something, that you can be a hero. Look again at the face. This is why representation matters

The message of story can simply be this – You are not alone. You are not and never will be “less than”. You can aim for the stars!

You are not a Freak

You can be a Time Lord

You can be a Slayer

You can be a doctor, teacher, fire-fighter, lover, hero, detective, scientist, engineer.

You can be whatever the Hell you want.

And most importantly, You matter. You have inherent worth. You deserve justice and equal treatment. You are valid. You do not deserve to be ignored or beaten or sidelined or over-looked or shot to death. So yes, I will absolutely shout out that Black Lives Matter. That Female Lives Matter. That LGBT lives matter. And let’s tell stories which reflect that.

“I see other people and viewpoints in the story” – Growing empathy for the “Other”.

Because the key ingredient to eliminating any kind of prejudice is empathy. It’s that understanding, even a limited one, of another person’s experience and perspective. It’s the ethos that underlies that old proverb about walking a mile in another person’s sandals/moccasins/shoes. It’s the idea that once you have imagined yourself in the same situation as someone, it’s more difficult to hate them, or beat them, or discriminate against them. It’s the idea that once you have put yourself alongside another person that you stop seeing them as one of “the others” and instead as a bother. Empathy doesn’t always come naturally and some of us feel it more keenly and deeply than others; but it can be learned and developed by all but the most psychopathic of us.

Empathy isn’t just saying “Oh I understand” and patting someone on the head. It’s s a blood and guts feeling of sharing what the other person is going through. It’s feeling that ache or joy deep down inside and mourning or celebrating with and for someone else. It’s not just wringing your hands or smiling. It’s DOING something.

Hearing, reading, watching and experiencing the stories of others is how we develop empathy. It’s one of the reasons story exists, to help build community; to elicit a feeling of association between peoples; to develop that sense of “me too” that enables to tribe to function – Friendship, community & the ‘tribe’ are built on that “me too” feeling, which is why empathy is so critical to our social development. Exploring the experiences of others within stories helps us grow and develop this virtue. It does take a level of imagination to put yourself in someone else’s place, but as with any good habit it becomes easier with practice – and immersing yourself in stories and the lives of the characters within those stories essentially stretches those muscles of empathy to allow you to then apply that empathy to people you come across in day to day living.

But if the tribe then only tells stories about itself it becomes increasingly insular and hostile to anyone outside the tribe. Even more so if the focus is on an ‘us versus them’ narrative. Likewise if the tribe only tells stories about certain elements of itself (i.e. the male warrior sect) then that implicitly invalidates other elements within the tribe. The default within the tribe when talking about “people” is that of the group which we tell the most stories about. So we have a situation told of by a friend on Twitter where a gentleman she was talking to about the new Ghostbusters film. He said “I don’t know how you can have the film without the Ghostbusters”. What he meant was that he didn’t know how you could have it without the male Ghostbusters. Because his experience of story was limited to the “default type” and anyone who didn’t fit in to that default type was not classed as valid.

(Tangent – This is also true of the language we use. Think of how “mankind” is used to describe all humanity. It’s long past we adopt “humankind” or the potentially less clumsy “humanity” – although think about why we think of “humankind” as a clumsy word, it can feel odd on the tongue and to the ear, but is that because it’s simply unfamiliar, is it because we’re making that conscious choice not to invalidate the majority of the human race by excluding them from our language?)

And what do we do to people we don’t class as “valid”? What do we do with the “Other”? We treat them as less than human. We treat them as if they had no value, dignity or as if they didn’t reflect the image of God the way we do. We simply don’t see them as if they had any of those things because our narratives have been shaped that way. And we’ve seen stark evidence over the last few months how narratives can shape our attitudes to people not quite like us. Notes pushed through Polish doors telling the “vermin” to go home. Nightclub party-goers gunned down in exterminator like fashion because two men kissing should just be kept in private. Black men who are already subdued shot in the face. Innocent civilians murdered by air flown bombs in the name of protecting them. Hate and violence are bred by not seeing people as humans just like you.

So if we want to stop this we simply have to learn to see the similarities in “someone utterly unlike me”. And help others to see this too. To make the stories of “them” known until they become “us”. To both acknowledge the difference in others and celebrate it and also see past the difference to our common humanity. To see that people utterly different to us (Black, LGBT, Young, Old, Female, Polish, Jewish, Poor, Muslim and, and, and..) have the same fears and joys. That they too fall in love and encounter barriers. That they too can laugh and cry and fall down and leap over rivers and wander when lost and reach for the sky. That we all fail, that we all succeed.

Creating, growing & developing empathy means reading stories about every kind of person, stories that don’t buy in to negative stereotypes. Even for those of us who are naturally empathic, to use that gift for all people means being exposed to all people. It means being exposed to cultures and people that might at first makes us uncomfortable. It means allowing our prejudices to be challenged by seeing “odd” things as normal – two women kissing, for example. It means recognising that actually, you don’t really know anyone who is “other than you”, but you do have 7 billion siblings out there. Every single one with a pretty awesome story.