I’ve wanted to write about “The Body” from almost the outset of starting this blog. There just hasn’t been a good time until now. Following on from the last post and the idea that our unhealthy reaction to famous deaths is a symptom of the madness resulting from not “dreaming” (telling good stories) about death and grief, I knew this was the time to let people know how I really feel about this 45 minutes of televisual storytelling.

For a TV show that features a lot of death, based in the fact and inevitablity of death, birthed from the vampiric myths of our ancestors, founded in the nightly dance with danger of a young girl, the deaths of characters we love still hits hard.
There are a number of significant deaths that we encounter on the show. Jenny Calendar, Angel, Maggie Walsh, Joyce Summers, Buffy, Tara and Anya. Two were resurrected, but does that take away from the pain felt by both the characters and audience? Of course not. One of them was arguably a villain, but was her death any less shocking or impactful on the story? (This also raises questions around allowing yourself to grieve for someone who may be “villainous” but still had a positive influence on your life – that’s the power of story!)

Of these deaths it was Jenny’s that I personally found the most shocking but it’s Joyce’s death and the aftermath that impacted the characters and audience most deeply.

The episode “The Body” is beautiful, perfect, honest, ugly, shocking, painful and truthful. As a piece of art it certainly stands as a masterpiece – the direction, performances, structure and script are absolutely spot on. As a treatise on grief and handling the death of a loved one, it’s a must watch.

To see Buffy, our hero who is strong (physically, mentally an emotionally) and together and steady and so in control; to see her face and hear her descent into being a child (“Mom. Mom?… Mommy?) is painful. Her desperate call to 911, the pacing, the horrid sound of Joyce’s ribs cracking as Buffy attempts CPR. The throwing up, the interlude with the paramedics and the first reference to “The Body”. And then when Giles comes she too refers to Joyce as ‘the body’ and is horrified at the thought that her mother is now just a corpse and at the thought that she herself so quickly saw her that way. Through all this Sarah Michelle Gellar’s performance is note perfect and our empathy built over 5 years of engaging with this hero enables us to feel each moment along with her. And it’s important that we feel these moments, to explore these moments, to imagine what we might do in the same circumstances. That’s what Story does for us. That’s what empathy does for us. 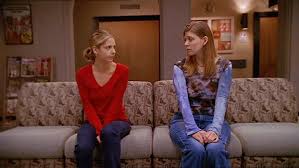 And it’s not just Buffy we share this with. It’s not just Buffy who’s affected or only her reactions that matter. We see different reactions to Joyce’s death. Willow’s hyper-activity, with her need to do something, to fix something. (And we’ll see later in Season 6 how that compulsion plays out.) We see her concern for how Buffy will see her and think of her, her concern for Buffy’s feelings over-riding her own, her love for her friend is absolute. But the grief also springs from her own affection for Joyce, a different level of connection, but no less legitimate. Then there’s Tara’s calm resignation and concern for her lover Willow, her steadiness and support is almost tangible through the screen, her steadying presence a comfort to us as well. The loss of her own mother is held out to Buffy at the hospital as a form of comfort and solidarity.

Xander reacts from his heart, with anger, with blame, with silence, with violence – punching a wall is damaging, but oddly satisfying. As the ‘heart’ of the scoobies he usually is the one to bind them together, to bring comfort and in this he finds he’s unable to do that, at least straight away, and this confounds and irritates him; being the most empathic of the group finding his empathy failing him in this moment it’s most needed actually hurts him, which is why he then expresses that by punching the wall. As an empath, I can relate to the poor boy.

And then there’s Anya. In a speech that just perfectly articulates the confusion, frustration and futility of death, Anya represents the feelings I’ve had myself and have had shared or seen in others. As a character who is essentially “new” to being human she’s the right choice to articulate the childlike confusion as to how stupid death is. It’s she who asks why, the why so many of us ask. It’s she who admits that she doesn’t know how “we go through this”, who asks the simple and obvious questions that seem to be the ‘unacceptable’ ones (and I personally think Willow is a bit harsh on her here – but then Willow is very particular about ‘rules’), who understands that it’s the small insignificant things that we miss about those who are gone, who understand that the tragedy of death is all the things our loved one won’t get to do – even when they are small, apparently insignificant things. It is she who most represents us in the story, who as someone peripheral to the actual tragedy still feels the sadness, because that’s the human thing to do.

The episode is rounded out with Dawn’s seeking out ‘the body’ (who she still refers to as mum), her driving desire like the disciple Thomas to touch the body as proof of what’s happened. Her collapse at the school, her distance from Buffy, her reluctance to be accompanied – these are her coping mechanisms. And then that need to see and touch the body. Which puts her in danger. The vampire attack in the morgue is unlike any other Vampire fight in the whole series. It’s the ugliest, certainly one of the most disturbing, highly uncomfortable and gives the sense that both Dawn and Buffy are in genuine peril. This genuine peril has happened before and since, but it’s not a feeling often invoked. But it feels right here, it feels like we need it to be perilous. And with the visceral disgust I felt as an observer at Buffy having to essentially fight a naked man right next to the body of her mother it felt to me like it represented the disgust I feel at death itself.

The episode stands by itself in understanding, processing and getting a handle on grief, but the show didn’t stop there. Many stories deal with death but quickly brush it away after maybe a couple more episodes. But with this story it continues to live with us. Indeed, the episode immediately following is a different take on the same themes, asking the question of what you do once the initial wound of grief has passed and life needs to start going again. It also starts to ask the question about what you might do if you lost someone and lived on a place like Sunnydale.

Dawn’s attempt to resurrect Joyce, in a reflection of the “Monkey’s Paw” story is both heartbreaking and terrifying. I mean, if I lived in a world with vampires and zombies and magic, I would totally have done a spell to bring my mum back. No Question. I still dream that she comes back… and it is both a wonderful and terrible thing. I’m not sure I would have the strength to prevent “it” coming back the way Dawn did. I think for Dawn it was the look on Buffy’s face, the joy and hope that would undoubtedly be dashed by whatever would knock at the door.

As far as the bigger universe which Buffy inhabits, I loved the idea that Angel came to comfort her for one night. Yes I love Angel, I love Angel and Buffy together, yes for story purposes they kept them apart… but I’m a huge romantic sap and much prefer her with Angel than anyone else… I just have to deal with it. Back to the point… The most important thing as far as Buffy is concerned is that her mum’s death isn’t just a five minute thing that is forgotten about within a couple of episodes. It lives with her throughout the entire run of the series. You can see how down the line it still haunts her, how the absence of that one important person makes her life all the poorer, how sometimes only that one person can help (and thanks to the PTBs she is able to help once or twice). It’s not something she gets over. Ever. It becomes a part of her, a part of decisions and actions and motivations. And here’s the thing it merges and becomes part of other griefs, which is how it seems to work for me. Each subsequent grief both recalls and builds on the great grief. Each loss both reminds us of our greatest loss and helps us overcome it and knowing we overcame and absorbed the first great loss helps us know we can overcome and absorb each one that comes. Like a wound that heals and becomes a scar, it never truly goes away, but gives us hope that the next wound will also heal. So yes, right through to the end the death of Joyce hangs over Buffy like a shadow and yet it also does not take away the good memories of her mother that give her strength and encouragement. That’s epic long term storytelling. Thank you Joss and Company. Thank you.