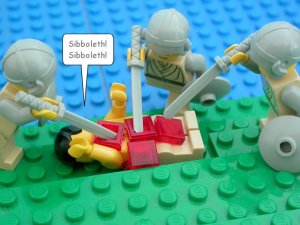 This post is the first part of a three post series, mainly because it was originally one post, but one very long post. And as I get bored if posts get too long, and I felt that it was all important stuff (albeit rather loosely connected, and mainly because I was in love with the alliterative title), I took the decision to split it into three parts – though the first part alone is getting pretty long now too. Stick with it. It’s important.

There’s a story in the Old Testament about ensuring we let the “right” people in and keep the “wrong” people out.
“Gilead captured the fords of the Jordan at the crossing to Ephraim. If an Ephraimite fugitive said, “Let me cross,” the men of Gilead would ask, “Are you an Ephraimite?” and he would say, “No.” And they would say, “Say, ‘Shibboleth.’” But he would always say, “Sibboleth”—he couldn’t say it right. Then they would grab him and kill him there at the fords of the Jordan. Forty-two Ephraimite divisions were killed on that occasion.” Judges 12: 5-6 The Message (Gilead is the collective term for the combined tribes of Gad & Manasseh).

Because of this story, the word “Shibboleth” has entered our vocabulary as a representation of ideas by which we judge whether people are worthy to be let in to our group. These are the Sacred Cows (another idiom whose source is the Old Testament) that we hold up as measuring sticks, the issues that are the swing vote on whether you’re “in”.

It seems that Christians have been especially diligent in using issues as Shibboleths over the centuries. The whole question of what you believe about an issue being the deciding factor on whether you’re a “real christian”. (Who’s deciding anyway?) It’s our shame as followers of the Prince of Peace that some of these differences have manifested through violent suppression of those who think differently and in war – think of the Cathars, the Albigenisian “heresy”, the Spanish Inquisition (Which apparently no-one expects). The religious wars of the 16th and 17th Centuries (and going on into the 18th) that wracked and split Europe were essentially disagreements over the Shibboleths of the day.

The Spanish Inquisition does its “Holy” duty

You might be forgiven for thinking we’ve passsed all that.

Although we’re not going to war over whether a woman can lead a church, or burning people at the stake because they have the “wrong” beliefs about creation or the smacking of children, we’re still fighting. And it’s killing the church. We’re still excluding people and breaking up and pushing folk to the margins. We shout and scream “you can’t possibly be a Christian if you think….” and roll out all sorts of peripheral issues. You name it. Smacking children, Women in Leadership,Sexuality (you knew this one was coming – more of that in the second part of the series), Gender roles in marriage, Creation, War…. and on and on. And the central core of what it means to be a Christian? Do Christians even know what they believe, is belief itself even the true Shibboleth? Is what we know about the bible the measuring stick? Or should it be how we treat people? I always find this from The West Wing helpful when thinking about Shibboleths –

Or actually, should we have a shibboleth at all? It seems to me that some Christians are more concerned with setting themselves and those with similar minds as gatekeepers of Faith; more concerned with deciding what a “proper” Christian really is than in showing it or fulfilling our roles as disciples of Jesus. And really, doesn’t it all come down to our arrogance that we can even think it is up to us to know the state of another’s soul, to know or judge how another person stands with God. And we progressives shouldn’t look smugly and think we’re off the hook either. We’re just as guilty. I’m certainly guilty of thinking (if not sometimes saying out loud as well) that if you’re a capitalist (or don’t care about the environment, or are okay with sending people to war) then you’re not a “real” Christian. And I’m sorry for that. I’m wrong. No-one has the right to judge another’s Faith.

It was with some discomfort that I witnessed the drubbing that David Cameron received on social media recently with the “You aint No Christian Bruv” meme shared across accounts of people I love and respect. Although I despise his politics and abhor the way he treats others, I was increasingly embarrassed at how vehemently fellow Christians insisted that they knew where this person stood with God,this person with whom they had no personal contact or relationship with. I had the same discomfort when Pope Francis (whom I really admire and respect) said that anyone who spoke about building walls the way Donald Trump does, could not be a Christian. Yes, everything he says and does makes me sick and is opposite to all I believe we are called to as Christians. But his ‘salvation’ is between God and him.

I do strongly believe in the idea that you will know the nature of people by their fruits and I also believe that it is right to call people on their behaviour. I’m all for challenging negative behaviours (especially in our leaders), standing up against injustices and calling our brothers and sisters to account. In fact, it’s quite right and proper and a sign of a healthy organisation/leadership that leaders are openly questioned and challenged. However, challenging behaviour, calling one another to ‘holiness’, spurring sisters and brothers on to emulate kingdom characteristics – these are all light years away from calling into question another person’s state of salvation. Only God can do that and we need to get out of that game. And I’m not entirely convinced that it’s really about that. It feels to me more like making ourselves feel powerful and in control if we get to control who is in and who is out. It makes us feel important to set ourselves up as if we were Heimdall at the gates of Asgard, or Gandalf shouting “you shall not pass” to the fire daemon – it sets us apart as the special ones. And of course I can understand the draw of that. But we are not called to make those decisions.

And yet we cling to the big story of “us and them”; the ones in the know and those with no clue; the saved and the damned. It’s as if we truly believe we’re stuck on some sort of cosmic Titanic and there aren’t enough life-boats, so in order to legitimise and ensure our own place in the life boat, we must rule out anyone else, and use violence to do it if we must. It’s every man for himself and we have to defend our place in the boat with a gun if needs be; we have to build those walls, and put up doors to keep “them” out and ourselves in; we have to plug the gaps so that the wrong sort don’t sneak in. Oh yes, the lure of the Shibboleth is intoxicating in the security it provides for those who are choosing the password. But you know what? There are more than enough boats on this Titanic for everyone. Every. Single. Person. Everyone has a space reserved for them, and every one of them deserves to be on that boat as much as anybody else.

5 thoughts on “Shibboleths, Shagging and Shalom – Part One”