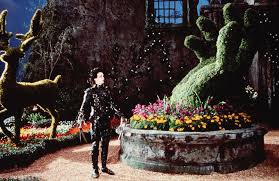 Yes, I believe a Christmas film isn’t necessarily about the time of year the story is set or the inclusion of Santa, Reindeer, a ‘Christmas Miracle’ or an angel. As with Spirited Away, I enjoy a certain type of film at Christmas – they are the stories that, for me, embody the true Christmas spirit.

So what might that be? It’s mostly about unconditional Love, but also about gentleness, joy and hospitality. It’s the inclusion and welcoming of “the other”. And this is where Edward Scissorhands comes in.

Although in form and plot a modern story it has the feel of a fairy tale. That’s partly because it’s more or less a retelling of Frankenstein so has a familiar feel, but also the general larger than life characters, the way the story is constructed (almost morality tale-like) and then there’s the music and dreamlike cinematography. As well as echoes of Frankenstein, there’s also a slightly Dickensian vibe – the orphan boy, the grotesques, the adoption into a new family, the tragic burglary, the self-sacrificing hero. Not only a Dickensian vibe, but most certainly (for me at least) a Jesus vibe. Dianne Wiest’s mother is archetypal motherhood and Kingdom living all wrapped up in one. She does not hesitate to invite the “monster” home, realising that despite appearances he is in fact an innocent. Through all the story she keeps faith in Edward and even at the end is reluctant to let him go. She unreservedly offers her home, her empathy, her skill and time to Edward. And that , for me, is what makes this a Christmas film. 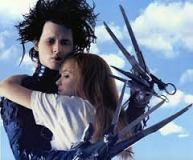 The plot is s simple one – Family welcomes stranger (and he is strange in more than one way), community welcomes him, established bullies feel threatened by his innocent nature, community turns on him when it becomes apparent that he shall remain “strange”, witch-hunt ensues, stranger escapes with the help of people who understand love. But the story is full of questions, full of meanings, full of lessons. What is conformity doing to our communities? What does it really mean to welcome the outsider? What is our reaction when faced with the “other”? When your hands are basically knives, what is your responsibility to protect yourself and others around you – and do we apply that to our tongues, a deadlier weapon than Edward’s hands.

All this (and more) confronts us as we journey through Edward’s tale. And yet above it all, I just enjoy the tale as one of enjoyment of the new, as acceptance, as family. I love it as a modern fairytale – and one of  a mother’s love above all (though Winona Rider looking resplendent doesn’t hurt). 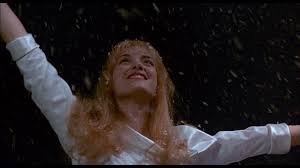 And if you’re still not convinced it’s a Christmas film, there are ice sculptures and a “snow” scene.