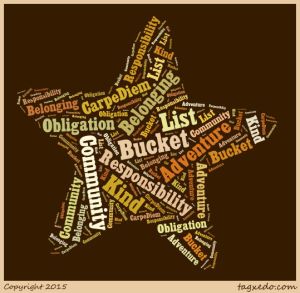 I wonder sometimes whether too much aspiration is toxic to our souls. I simultaneously wonder whether not enough aspiration is equally toxic. I wonder whether the key to this conundrum is having the right kind of aspirations – whether turning our souls on to the kind of dreams and hopes that will really feed us is the answer to the oncoming ennui that seems to be drawing us down into the pit of materialism. Even I don’t really know what I mean by that… maybe by the end I will.

I don’t know when the idea of making a “bucket list” became a thing. I’m not entirely convinced it was as a direct result of the Film starring Jack Nicholson & Morgan Freeman, but the idea certainly grabbed people’s imagination more since the release of the film. It’s actually a pretty good story, with ups and downs, friendship, love, motivation and the idea of making the most of life. These are all things I can get behind. I mean absolutely, the thought of ensuring you suck every last morsel, chewing on the marrow of life – something also talked about in Dead Poet’s Society – has always appealed to me. It’s making the most of the short time you have, it’s making the most out of the time you spend with the ones you love. It’s seeing a friend die far too young and knowing you have to honest and truthful with yourself. (Tangent -Yes, probably the big trigger for my coming out was the sad and unexpected death of a lovely lady in our church – I had been planning it for a while, but in that moment when I was told, after my sorrow for her, after the despair and pain for her husband and daughter, I knew what I had to do. I had to be honest with my friends and church to honour them. For I would want them to mourn the true me, not a false one.) 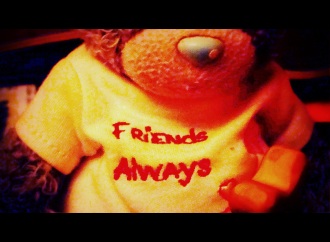 What also struck me about this story, and on multiple viewings it is now becoming for me the most obvious point of the story, is the idea that we don’t only belong to ourselves. That our pains, our sickness, our deaths, our joys, our triumphs are not exclusively ours. That the people we share this life with have a say in how we spend it. That, whether we like it or not, through commitment and obligation we are tied to the other people in our lives with strands that can be stretched and sometimes broken. When we ignore the fact that our lives do not belong to ourselves and simply go our own way, damage to relationships is the result. I’ve said it before and I’ll say it again many times, because it’s one of my core beliefs – We are made for community. And the idea of not belonging entirely to ourselves is part of that. This is most true when it comes to marriage – the One Flesh concept fits perfectly here. And we’re not one flesh because of our interlocking body parts, we’re one flesh, not belonging wholly to ourselves, responsible to and for each other because of the promises we make. (Something to think about in the Equal Marriage debate – I honestly did not going to make every post about that from now on, but that just came to me). And that leads me into thinking why we don’t make vows of friendship anymore, and if we did would that make a difference to our communities, to our relationships? Would we be less concerned about what we want, about our rights, about achieving our list and more concerned with our responsibilities, about our obligation to the others we belong to and are part of, about giving ourselves instead of getting for ourselves.

So I tell you what, I’m going to make a new Bucket List. A list that isn’t about how many mountains I can “bag”, or how far I can travel, or how my soul can be fed by beautiful sights. A new kind of list – a list that I may well not achieve, but one I aspire to rather than one filled with things I covet. I invite you to do the same.