They are the days we remember when…When we first kissed, when you left, when they were married. When he was born, when you died, when you held me. When we ran, when we holidayed. They’re the days that live with us, when almost mystically a collection of numbers brings an event to the forefront of our minds and we re-live it again. When the stories of our lives are re-told, year after year after year.

And it’s important to retell those stories year after year. It’s important to share those memories and stories again and again. In fact it’s so important that it’s how God structured the year for his people. By God’s intention the Jewish year revolves around the annual festivals commemorating the events and stories of their past. And the retelling of the stories are an integral part of those commemorations. In fact, not just retelling, but re-enacting them; reliving those stories – because the story and its constant retelling are integral to the identity of the community, to the building of the community; because the memory of that day, of that story, must remain in every member of the community for the community itself to remain distinct; because the story itself, more than any laws or directives is what draws us as both individuals and community closer to God. Here we see, as God institutes the Jewish annual celebrations that we should not be afraid of telling our stories, of telling them over and over again, that there is no harm but in fact virtue in telling a story more than once and that those stories are the engine that drives our faith, our life, our marking of the passage of time.

And the followers of Jesus, over time followed suit and built a year that shadows that of the Jewish year. A year built around the celebration of anniversaries, anniversaries marked by stories that need to be told annually. They need to be retold not only because we forget God’s prior provision and faithfulness (that’s right, we often do forget), but because one year we see the simplicity of the stable and God’s affinity with the poor and the next year we see the wonder and glory of the angels; one year we see the power of the fire and the next year we see the inclusivity of the kingdom. They need to be retold because it is simply in our nature to do so and we run from this part of our nature at our peril.

Because those stories bring a concreteness to the ideas and theories and theologies, the stories make it more real than rules or concepts ever could. When I go to the physical landmarks that show me the way and remind me of the past I always feel a need to touch them, to feel them – and I’m not alone. I’ve run my fingers along the columns of Notre Dame, felt the rough walls going down into The Great Pyramid, dipped my toes in the fountains of Seville. It simply makes it more real for me. Another aspect of this physicality of memory, of landmarks, is the taking of souvenirs. It’s the picking up of pebbles from a beach, the pressing of flowers or four-leafed clovers, the collection of soil from a battlefield – for me (all of us?) the physical representation of the landmark, or the place and the ability to touch and smell it again at a later date is just as important as the landmark itself. And this is what story is to our anniversaries – story serves the same function as our touching of a wall, it serves the same function as the empty bottle we keep; it brings us sharply into the reality of the marker, of the day we’re commemorating, of the person we’re missing. 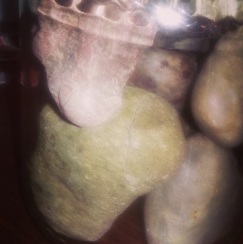 Mark your anniversaries my friends. Tell your annual stories. Discover Easter, Christmas & Pentecost and then re-discover them. Join your community in sharing local anniversaries, your church’s birthday, the Youth Weekend Away, the passing of a beloved matriarch. And don’t turn from your own anniversaries and their stories. Be willing to share them with others and to share the anniversaries of those around you. Be there to celebrate a marriage, rejoice in a birth, to comfort a loss, to mark the moments of significance – and share your stories through it all.