In ancient times, the land lay covered in forests, where, from ages long past, dwelt the spirits of the gods. Back then, man and beast lived in harmony, but as time went by, most of the great forests were destroyed. Those that remained were guarded by gigantic beasts who owed their allegiances to the Great Forest Spirit. For those were the days of gods and of demons…

The stories that make the greatest impact are those that we can get utterly lost in. They’re the ones that are multi-layered, with more than one central theme and that speak to us regardless of background, culture or age and with relevance through all time. They’re the ones that open our eyes to beauty, are painted with beautiful brushstrokes – even when showing us terrible things – and enthral us by drawing us in with characters of complexity.

Studio Ghibli’s story of Princess Mononoke is a tale such as this. A tale I can share with adults and children alike – honestly, our boys love it and have done so for years. It’s a tale that I have come to countless times and felt the story anew each time, have had another layer peeled back for me, had new emotions awakened and been reminded of all the old ones. 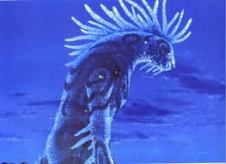 First thing to say about this is that it’s a very Japanese story – which is to say it’s a story very much grounded in Japanese culture and understanding. It’s also to say it’s a very human story – because we don’t need to understand the background or history or culture to truly connect with the characters and the story itself. That’s the beauty of story and why it is the most effective means of communicating ideas – especially ideas like beauty and wisdom. Because of the way that story is grafted into our bones, how it flows through our veins, its essential nature as food for the soul, because of this it transcends cultural boundaries. It allows us a sub-conscious understanding of other cultures – an intuitive connection that needs no more explaining than a simple “Once upon a time” – or the equivalent. We don’t need explanation or translation. Story is it’s own “babel-fish”, the connection between us all, no matter where from. And that’s why tyrants are often so afraid of stories – and why they burn books.

At its heart this is the simplest and most primal of stories – a youth sets out on a quest. Starting our journey with Ashitaka, the young warrior, rather than the titular Princess, allows the storyteller a way to bring the audience into the world of the story, joining a character that we can empathise with, a character who, like us first sees the consequences of something he at first doesn’t understand and journeys to discover its source. Ashitaka is an innocent damaged by something both alien to him and not of his making. It’s something he understands only superficially and his journey, along with ours as an audience, is one to discover the mystery behind what could cause such damage and horrors as those which crashed into his idyllic world. He does come to understand it by seeing the hearts and actions of the people he encounters on the quest. And understands too what it takes to overcome it.

This idea that not only violence, but a particular type of violence, is like a viral contagion which infects everything around it, including innocent bystanders is a profound one. It’s the idea that even honourable men who only want to defend their loved ones become corrupted by that violence, even as they remain essentially good and honourable. That such a contagion started with a musket rather than a sword is an interesting one. It’s clear that on Ashitaka’s journey there are terrible men who wield swords and firearms alike – yet the forest lord that Ashitaka encounters at the beginning of the story, his infection started with a shot from a firearm. But I don’t really think it’s the choice of weapons that are the source of the corruption, it is the hearts of the men themselves. Ashitaka himself understands that it is hate which is at the source of his “curse”, Fear and Anger feeding it, making it stronger.

We discover the Princess and her wolves along with Ashitaka – and as a consequence see her through his eyes. And for the sake of the story, it’s good that we do, for seeing her through the eyes of others, she is almost a monster. The inhabitants of Irontown would brand her bandit, terrorist, assassin. But he thinks she is beautiful, for he sees beyond the perceptions and to her heart, seeing where her actions come from – the love of her wolf family and of the forest itself.  In turn the inhabitants of Irontown are rapers of nature, tearing trees and poisoning animals, yet they too are innocents, the down-trodden, the sick and overlooked who are simply trying to make their way in a broken world. And lady Eboshi – although an unconventional champion of women and underdogs (a tick in the “good” column) is one who works towards the capturing of the Night Walker’s head – and will betray to get it. This kind of ambiguity around the characters’ propensity for good and evil, about whose “side” they are on makes for some of the most interesting stories and the most profound – for it reflects that there is good and evil in all of us; the choice is ours.

The Choice to give in to the fear and anger as the blind boar god Okkoto does. The Choice to deceive the vulnerable as Jigo’s men do by disguising themselves in the skins of dead boars. The Choice to go with the path of kindness and compassion as Ashitaka does by binding the wounds of two men he had no reason to and delivering them to their families. The Choice to not be afraid of the unknown by travelling through the deepest forest. The Choice to experience Wonder and Beauty. The Choice of Acceptance of your end. The choice of Love above all things, of family, of others before self. The Choice of admitting you love someone but still choosing to be apart. The Choice of refusing to be pushed away, of holding on, of loving through everything.