Ah, National Storytelling week is upon us (sneaked up on me if I’m totally honest). I’ll share a handful of posts through the week and will start with a story that is an old favourite of our family. I have had this story told to me many times, and in turn have shared it with others round campfires, on long car journeys and in moments of friendship. So, for your entertainment – The Story of Running Water and his brother Falling Rocks.

Big Elk was the chief of the Dark River tribe. He had two sons, both of whom he loved, both of whom were brave, both of whom were wise. The two sons, Running Water and Falling Rocks, were called by Big Elk into the dark of his teepee. Looking with pride upon his sons he knew that the time had come to hand leadership of the tribe over to one of them. The tribe was one of ancient wisdom which did not chooses its leaders based on anything as foolish as which one had been born first. And so Big Elk spoke gently to his sons.

“I am drawing to the end of my earthly adventure. I am confident that one of you is able to lead our tribe through the next steps of the dance through the stars. But you must be worthy my sons. I ask that you travel this great land and seek adventure. Return to us within a year and a day and share your story. I and my council shall judge your achievements and choose our next chieftain.”

The next morning the brothers embraced one another and set off in opposite directions, one to the West, the other to the East. The tribe settled back into every day and waited for the brothers to return.

A year passed and Big Elk sent his hunt master, Swift Arrow, to the edge of the tribe’s lands to watch for the return of Falling Rocks and Running Water. Swift Arrow waited all of the day and all the next day, until sunset. Just as the sun dipped below the horizon he saw a group of figures coming steadily towards him. The indistinct forms became clearer and he saw a man and woman, leading a noble horse. The woman bore on her back a newborn babe, the child of the returned son of the Tribe. Swift Arrow ran to his kinsman and saw it was the elder of the two brothers, Running Water. Around his shoulders he wore as a cloak the hide of a great black bear and in his hands he bore a mighty spear. Running Water and Swift Arrow embraced, with running water asking whether Falling Rocks had returned. The sad shake of Swift Arrow’s head was all that Running Water needed.

Running Water continued towards the main village, along with the woman who was now his wife and his kinsman Swift Arrow behind. Arriving at the village, he embraced his father Big Elk and sat to tell his tale.

He had traveled to the West and seen much of the land. He had slain the bear and saved a village, taking the bear’s hide as his prize. Moving on to another tribe, he had forged a peace between that new tribe and its neighbour, earning honour in their combined battle with the encroaching white man. Moving on, he rescued a woman from being taken into slavery, took the chief slaver’s spear and married the woman. Having reached the limits of being able to turn back in time, he took his wife and all his prizes and returned home, just as Swift Arrow had seen him.

Yet there was sadness in Running Water’s heart, a sadness echoed throughout the tribe. For his brother Falling Rocks had not returned. The tribe waited until another moon had visited and then another and Falling Rocks has still not returned. Running Water went to his father and begged him to allow him to take five braves and search for his brother. Naturally, the loving father accepted the request and Running Water embarked on the search with five faithful warriors.

It was not difficult to find evidence of the brave warrior’s passing – he had achieved and surpassed his brother at every step. One tribe told how the Great Warrior Falling Rocks had saved the tribe from a pair of savage bears. Another told how he had single handedly rescued their braves from a landslide. They found the tribe where he had lived for a short time with his wife. She showed them his twin children, one girl, one boy, both beautiful. Eventually the trail led them into lands inhabited by the White man. Running Water, being the bravest of the group volunteered to venture into the lair of the barbarians. Walking through the strange avenues called streets he encountered a man, who to his surprise spoke his own tongue. The White man knew his brother Falling rocks and had been taught how to speak the language of the Dark River tribe. And so Running Water learned how his brother had truly conquered the white man – through peace and friendship. When Running Water asked where his brother had gone upon leaving the town the White Man looked grave and bowed his head.

“He said he had faced the dangers of this land, but that would not be enough to rule your people. He sailed East in a ship to the lands of my forefathers. I do not expect him to return.”

At this Running Water’s heart fell and he wept, the five braves weeping with him. He was a brave warrior, but looking at the great stretch of water, and feeling the emptiness of it beneath his feet put him in so much fear he knew he could not follow his brother. And he knew his brother was a greater man than he. But he could still do one thing for the departed warrior. He asked the White man to keep watch for the return of his brother and to ask others to watch for him also. He fashioned a sign so that all men could know to be watching for the great warrior who knew that peace above all was the way to conquer. He gave the sign to the white man, who promised to copy it and send it out on the very next ship, to place it around the town and to pass it on to all travelers. Running Water and the Five Braves would also place copies of the sign along the path of their journey home, and ask all who knew of his brother to spread the word to look out for him.

And so it is to this day, wherever travelers have roamed, if you are lucky, you may see one of Running Water’s signs – To Look out for Falling Rocks. 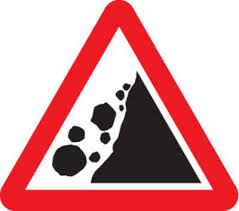