In the age of the dvd boxset, Netflix “binge-watching” and with all the services out there essentially the ability to create our own tv schedules not being far off it’s clear that tv is tuly established as our primary mode of storytelling. But these aspects have helped it take on some of the characteristics that had previously been lacking, had prevented it being true storytelling. Because it’s now the ability to watch, re-watch and re-watch again year on year that finally elevates the medium to being truly the ultimate in storytelling. Because (I would argue) that a story doesn’t truly live until it’s been 1) shared (I touched on that last time) and 2) shared again and again 3) retold again and again. If you watch/read/experience a film/play/book/story/show only once you are only getting a small part of the story experience.

Again, this is an aspect I’ve touched on before in relation to scripture based stories – and the absolute need for us to continue to share stories we’re already familiar with in order to learn about ourselves, God and the community around us (you learn a lot about someone from how they see and interpret a story).

A story (of any medium) only really lives in being loved, remembered and returned to over and over again – If you’re asked to name your favourite book, or one that has had a lot of influence on you, I’d lay money on it being a book you’ve read more than once. And what makes the story live inside us? It’s the contradictory dual truths that every time we experience/read/watch said story it both offers us something new – an insight, a new perspective on a character, sudden epiphanies regarding events, changing loyalties, new doors opened on how we see life – and it offers us a landscape of utter familiarity, predictability, dependability – all of which are more comforting than any of us dare to admit.

So as well as new stories that I’m discovering all the time (Marvel’s Agents Of Shield anyone – excited for new series starting, when oh WHEN is it coming to UK?) I still live in a universe that I continue to share with the inhabitants of The West Wing, with Buffy and the Scoobies, with the Firefly crew (*sob* too short a time) and the “last remnants of humanity” aboard the Galactica and it’s fleet. And ten years on from the pilot, still sharing my universe with the survivors of Oceanic Flight 815 on Lost. 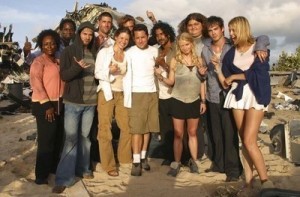 Amidst all the mysteries, heroics, running about, Flash-backs, Flash-forwards; amidst the love triangles, quadrilatarals and ever increasing laterals; amidst revenge and manipulation, side-switching and rug-pulling; amidst all that was a community. A community who were allowed both a blank slate and a rich history which influenced their daily behaviour. A community that might be fighting each other but the minute the community is in danger, the co-operation and pulling together was second to none. Jack’s speech to the survivors in the nth episode sums up this community and what true community is for and about. “Every man for himself is not going to work. We have to learn to live together, or we’re gonna die alone.” Kate (the wonderful, brilliant, Marvelous Kate) is the first to invoke this early in season 2 as “Live together, die alone” and it’s then invoked as a rallying cry both explicitly and implicitly throughout the series.

But really, it was the everyday, living together, getting food, sitting ’round the campfire that got me. It wasn’t even necessarily the main cast (although some of them I truly love – the ongoing Love story of Jin and Sun is guaranteed to make me cry every time) and how they co-operated and faced the island together – it was the guys in the background just getting on with everyday life living as a community. Just having 40 people in your life and having to rely on each other and get on with each other and both being in each others’ pockets but having the freedom to wander off into the jungle… that kind of life really appeals to me. And living on a beach… who wouldn’t want to do that?!

As for the ending – that, for me, was just beautiful. I know a lot of folks felt swizzed or that it was a cop out and somewhat cheezy – but hey sometimes I like cheezy. No, to me, it was pretty beautiful that this moment in time on earth where they had shared something, no matter for how short a time (yes, I’m talking about you Boone) was so integral to who they were on a deep “soul” level that it would be part of them forever. That the community itself was part of their final eternal destiny (and actually, isn’t that true for all of us?). That only together could they go into the light and … well, wherever it was they went. I don’t know, maybe that reveals more about me and my despearate need to be part of a community (a small one people – I am an INFJ after all! 🙂 ) than it does about what this story was all about – but to be honest, I don’t think I’m far wrong. They were lost, each one until they landed on that island and found each other. I just hope one day you’ll find that true heartfelt community, without having to get lost on a magical jungle bound island to do it.