God works all things together for the good of those who love him.

Difficult words for some, easy words that trip off the tongue for others. Impossible to hear when your soul mate is gone, when your parent is gone, when you are alone in a deep dark hole – but nevertheless true for all that. They are words often said too quickly, too glibly – almost as a reflex action to suffering and pain we don’t understand, or don’t want to understand. They’re words originally spoken/written by a man who had been blinded, had been an accessory to murder, had been in prison. A Man who truly knew pain, truly knew the wretchedness of life – but still wrote “God works all things togerther for the good of those who love him” – and then later that nothing will separate us from the Love of God.

I think about this verse and this attitude, this idea that can drive and influence my own future every time I watch “Signs” by M Night Shamayalan. (I said we’d come to him again). It’s a sad story, often an intense story, a potentially frightening story, but in the end an inspiring and simple story of how family works, how community works, how God works. 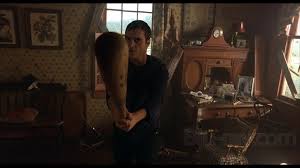 There are of course lots of other themes and elements of this story – there’s fear, fear of the ‘other’. Sometimes the ‘other’ is ourselves – to children, adults are the ‘other’ just take a minute to think about that. Yes, to our children, your children who you love and who love you, you’re the alien.  Uncomfortably, the reverse is also true; to adults, children are so alien, so different, and their difference can be disturbing, incomprehensible and confounding – and here is where we base our love for children not on how they make us feel or whether we understand them, but on an action of will. There’s family, here we have a non-traditional family and it’s just the most natural thing. There’s the feeling that you go through the whole film with where you are absolutely aware that the storyteller is using all the tricks at his disposal to manipulate you – I spend a lot of the film in a heightened adrenalised state, and jump a lot – and yet, even though you know it’s happening, you willingly go along with it. Is that because one of the purposes of story is to scare us occasionally, perhaps we like being scared? Maybe.

And so I invite you to explore this story, enjoy it, think on it. and do not be afraid of being angry with God; do not be afraid of shouting and hating him every now and then – because know this – He really does work ALL things together for the good of his children, and NOTHING can separate you from his Love.

2 thoughts on “All things work together for Good?”